How to Explain Your Business Ideas to Your Development Team

Being able to communicate your Business ideas clearly and systematically is one of your greatest qualities as a leader. Throughout human history, the ability to convey new ideas has brought with it not only change but also revolution.

But for the sake of this blog post, we want to put aside the Business ideas of unleashing the revolution.

We will focus on how to effectively explain your Business ideas to your application development team so that the team can create the app of your dreams the way you want. 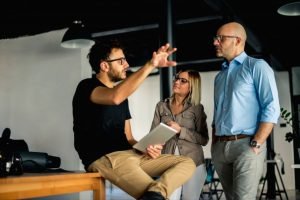 Why is it Important to be Able to Effectively Explain your Application Ideas to the Development Team?

What if you can’t Communicate Clearly with the Developer?

As mentioned above, the biggest victim is, of course, his idea in itself.

You can do this for:

Take Steve Jobs as an example; one of his greatest strengths is his ability to clearly communicate his vision and design ideas to his product designers. The product designer can then do the same work with the manufacturer.

So when you explain and communicate your app ideas to the team that’s about to launch your app, don’t just assume they understand all aspects of your app’s idea.

Well, if you have an internal team of developers, there is no need to introduce it to your company. But if you’re recruiting or hiring a team just to develop your app, it’s best to provide some details about your company.

Once they know your company, it’s easier for them to understand their goals and the nature and size of their target audience.

User Stories can Help you Explain the Concept of an Application using Real-World Scenarios.

Our brain is tuned to pay attention to stories because we can empathize with characters.

When we sympathize with users/customers, it is easier for us to understand the problems they face.

These are very small, concrete stories based on models. They talk about a person who has a certain problem, and he needs to solve it.

As a student, I want my app to allow me to quickly create notes that I can retrieve later in their logical order.

As a music lover, I would like to automatically generate playlists of my favorite band.

Explain How People will Use Mobile Apps.

For example, you want to develop a mobile app for those who want to quickly navigate the news of the day without details, probably 40-50 words maximum.

You should be able to communicate with your development team, the application will be suitable for those in a hurry who do not have much time, but do not want to know less about your chosen area, be it politics, sports, news or charm.

In a highlighted horizontal rectangle, they should get a complete list of news and then go to the next news.

They can use the app for an additional 5 minutes while standing on a certain line, using public transport or waiting for an elevator and a fall. This means that they must be able to access their news sources as soon as possible without interference and without additional information.

The typical user may not even need pictures and videos.

When they add pictures and videos, they can also include a social networking feature to share images and videos that you don’t want to use in your app.

But if they know how your typical users will use your app, they will be more sympathetic to your needs and build the app accordingly.

Why are there all the features at first? While you may have time to market limitations, you’ll be surprised to know how quickly and efficiently an application can be developed if it is built in stages.

You want your app to do everything you can think of, don’t you? It’s understandable. You want to create an application for the Swiss Army Knife.

Focus on the most powerful and desired features of your application and ask your development team to do so. Then release the base version.

Return to the previous example of creating a news application.

What about accessibility? Should users be able to use their own fonts? Should they be able to increase or decrease the font size, or the news is remembered (maybe 100 words instead of 50 words)?

It would be better if users of your app can share important news with your contacts, perhaps via WhatsApp or jerks. This is an important feature, but it is not necessary to include it in the first version.

A big plus of releasing a minimal version of the app is that you can get healthy feedback from people before investing more time and money, not only making more changes but also adding more features.

In what way should your team give you updates?

How fast should the team respond in case you have a concern?

How can communication be more effective and faster – email, Skype, Google Hangouts, Microsoft Teams or Slack, or another communication tool?

Once you have decided upon the communication process or protocol, the entire team will stick to it and you will be easily able to communicate and give feedback.

Explain the Deadline and the Budget for your App Idea to the Team.

Having a feasible deadline will allow you to get your app completed on time. Similarly, having a budget will give your development team an idea of how much effort they need to put in to give you what you want.

Suppose you want an e-commerce app to enable your customers to buy Christmas gifts.

It is June and one week before Christmas, you want to reach your target downloads so that by the time the festival comes knocking, people should already know that they can use your app to buy gifts in a more convenient manner than they can do on other websites and through other apps.

So, you do not just need the app completed by September, you also want marketing and promotion of your app to begin by the third week of September.

This, you will need to clearly communicate to the development team.

While deciding on the deadline and the budget, you should also trust the development team as they may have a different take on these two aspects of your app project.

Remember that finally, they will be the ones working on the project, and having worked on many more such projects, they have a basic idea of how much time such projects take.

Being able to communicate your idea can be a matter of survival sometimes.

There is a documentary that shows a couple living in the jungle the way the primitive people used to live, with the same Stone Age tools.

Hunting was a big part of survival.

Whether they got sufficient nourishment depended on whether they were able to hunt or not.

Communication is the key for the couple as, just like primitive men and women, they cannot use language, but still, they need to plan how they are going to carry out the hunt for the next meal.

Through their communication skills, they need to plan how they are going to protect themselves at night without becoming a meal themselves.

Communicating and explaining your mobile app idea to your development team may not be equated with hunting to survive, more or less, the concept is the same.

Your ability to communicate and explain can make or break your great business idea.

The key to carrying out a better explanation is, taking the need to explain seriously.

Seriously, many projects fail because there is a communication gap between the person who comes up with the idea and the development team that tries to transform that idea into a business app.

Have a communication plan.

Write down the steps your team needs to follow.

Make a list of the most important features without which the app has no meaning and then decide to focus on those features instead of other, additional features that your app may have later.

Half the work is done once you have explained your app idea properly.